From Apollo to Jupiter

The admiration for Beethoven as the epitome of a creative artists hit its peak at the end of the 19th and during the first third of the 20th century. The heroisation of the composer in fine arts was not restricted to Germany and Austria but was also expressed in works by French artists and in various monuments erected on the American continent.

From now on Beethoven was not depicted as a contemporary musician or inspired composer but compared to the heroically struggling titan Prometheus or even Jupiter, the highest of all gods. 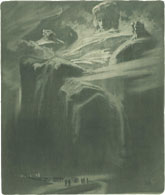 Beethoven high up in the clouds by Adolf Lang (1905)

To express this special admiration for Beethoven, many artists such as Franz von Stuck (1863-1938) or Joseph Adolf Lang (1873-1928) portrayed the composer on a very high throne. By using plain and blocklike forms, they tried to give their works a particularly monumental impression to show the distance between the titan "Beethoven" and the ordinary human being. 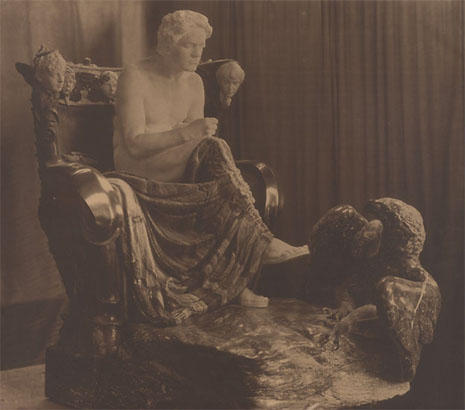 Max Klinger's Beethoven monument is probably the best example for such late romantic ideas in fine arts. Klinger (1857-1920) strongly admired Beethoven. He believed that music was clearly superior to sculpture as it depended less on the material world and was therefore closer to deity than fine arts. Beethoven, who in Klinger's eyes was the greatest composer, was therefore not just an inspired and creative man. In the artist's opinion, he had almost become a god and the epitome of an artist.