The second student of Rodin who concentrated on designing a monument for Beethoven was the Latvian sculptor Naoum Aronson (1873-1943). 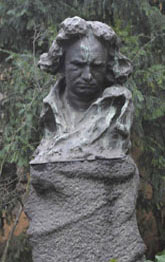 Naoum Aronson : Beethoven monument in the garden of the Beethoven House in Bonn (1905)

In the summer of 1905 Naoum Aronson visited the concerts of the seventh Bonn Chamber Music Festival organised by the Beethoven-House. Under the impression of the performed music, the sculptor already began his first studies for a Beethoven bust during his visit. 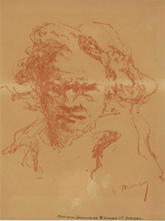 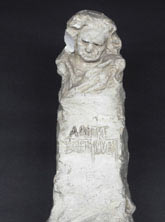 Naoum Aronson: Drafts and models for the Beethoven monument in Bonn (summer 1905) 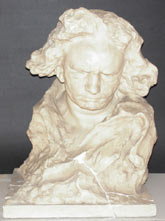 Shortly later, Aronson produced a monumental gypsum model in Paris. The intensive effect of his Beethoven portrait is particularly enhanced by the way Beethoven's head is tilted and the clouding of his eyes. The composer does not face the beholder but averts his gaze and appears as an artist full of passionate ideas but living in his own world - an opinion totally in line with the ideas of the early 20th century.

Aronson gave his model to the Beethoven-House which appreciated this modern depiction of the composer so much that it asked Aronson in August 1905 to reproduce the bust in bronze. In the autumn of 1905, a granite pedestal was made for the sculpture following Aronson's draft. On December 17th, 1905 the monument was finally unveiled in the garden of the Beethoven-House. There it can still be seen and admired by the museum's visitors.