Beethoven monuments of the Reform Movements in the early 20th century

Max Klinger was not the only artist of the early 20th century to express his admiration for Beethoven. During this time a whole range of works was created. Particularly interesting is the project by Fidus, a reform artist, which is based on a monumental concept.
Whatever activities he engaged in, Fidus always aimed at reforming the modern world's entire worldview and view of life.

Consequently, he wanted to create alternatives for the power of established occidental churches and Christianity. From this approach he developed several drafts and concepts for temples to glorify outstanding achievements and ideas of the occidental culture. 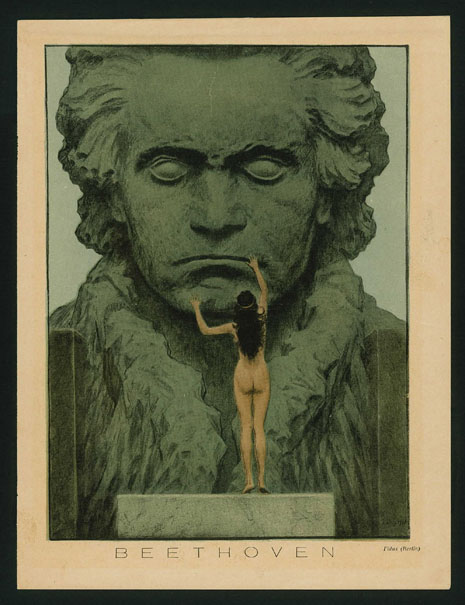 His draft for a "Beethoven temple" is to be seen in this context: A rotunda with a cupola and a centre with an overdimensional Beethoven portrait.

The first draft for this sculpture dates from 1900 and includes a half length portrait of the composer. A naked female figure - probably the human soul - stands in front of Beethoven.
Just like many other projects, Fidus never realised his draft for a Beethoven temple.