In the years around 1900 the admiration for Beethoven reached a special height not only in Germany and Austria but also in France where men of letters and artists focused on Beethoven and his art. Two artists living in Paris were especially important for the development of a novel and modern type of monument: Antoine Bourdelle (1862-1929) and Naoum Aronson (1873-1943). Both were taught by and worked for Auguste Rodin (1840-1917), without doubt the most important European sculptor of the late 19th century. In their style both artists were strongly influenced by Rodin's expressive works. 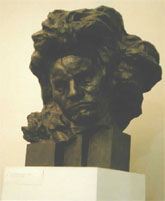 Throughout his life, Emile Antoine Bourdelle dealt with Ludwig van Beethoven. He created the first Beethoven busts in 1889. Until his death in 1929, Bourdelle repeatedly focused on the great composer's personality and art, creating many designs, models, paintings and sculptures depicting Beethoven. Even today, more than 20 different portraits of the composer painted by Bourdelle exist. 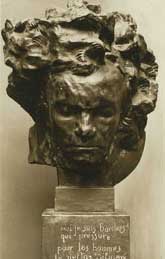 Although Bourdelle's admiration for Beethoven was as high as the admiration shown by German late romantics, his style is entirely different from the way German artists portrayed the composer. Around 1900 at the latest Bourdelle was not interested in creating Beethoven's realistic looks but preferred a monumental depiction of the composer, expressing pathos, tragedy and heroic passion. To achieve this effect, Bourdelle used free forms full of vigorous movement. In their expressivity and passions, these forms are evocative of works by Rodin.