The Beethoven monument on the Münsterplatz in Bonn

When a competition for designing a Beethoven monument was held in Bonn, a number of more or less renowned German sculptors applied for this reputable project. In the end, the draft by Ernst Julius Hähnel, a successful sculptor from Dresden and Munich, was chosen. His concept was regarded as modern and still elevated enough. 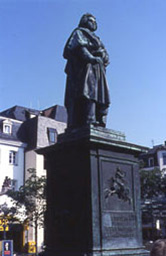 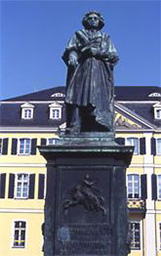 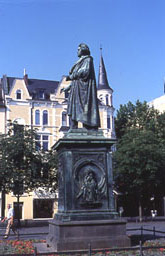 Hähnel portrayed Beethoven in the clothing typical for German and Austrian middle classes during the first half of the 19th century: Shirt, neckerchief, long sleeved jacket and long trousers. However, the artist added a large coat to give the composer a certain superior impression.

Beethoven's pose - his legs are slightly apart and he holds a writing feather in his raised right hand - should express his musical inspiration as well as the trendsetting aspect of his art. 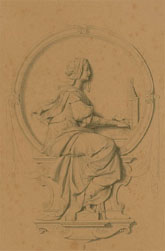 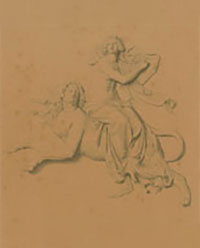 Reliefs from the pedestal of the Bonn Beethoven monument 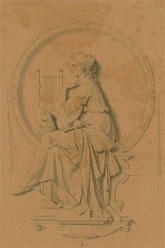 Whereas Hähnel's Beethoven statue was met with criticism - people considered the statue as either too elevated or too plain - the reliefs which Hähnel created for the high pedestal found the public's approval.

They feature allegorical depictions of the different types of music composed by Beethoven.