Already in the 1880s Max Klinger, then living in Paris as a student, focused on the project of creating a monument in honour of Ludwig van Beethoven. As he once said, he had the first ideas for a sculpture when playing the piano. Thus, the first version of the later monument was born. Klinger then realised his idea in gypsum and coloured it vividly. 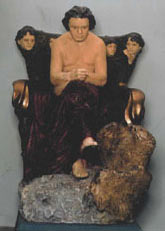 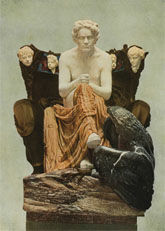 During the decades before 1900, Max Klinger used this model to design a large-format sculpture. He unveiled it for the first time in public at the exhibition of the Vienna Secession in 1902.

Also Max Klinger depicted Beethoven as a bare-breasted Olympic deity. Thereby, the sculptor alluded to the ancient way of depicting gods. The large coat that is wrapped around the composer's lower body and the sandals he wears were designed according to traditions of the ancient world. Beethoven sits on a richly decorated throne. At his feet rests an eagle, Jupiter's heraldic animal. Beethoven's hands are fisted, his facial expression seems concentrated and energetic.

Beethoven's "high rank" in Klinger's sculpture is additionally supported by allegorical scenes on the throne's exterior where the composer is also related to redemption motives taken from Christianity. 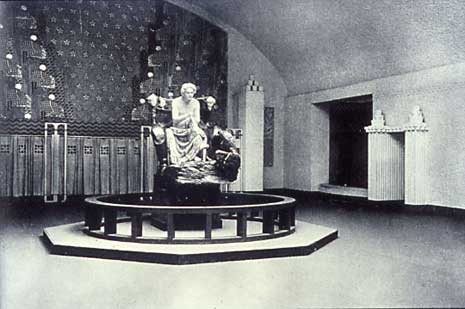 Max Klinger presented his Beethoven sculpture for the first time in public in Vienna in 1902. The room at the Secession building, where the work was put up for display, features a frieze of figures by Gustav Klimt (1962 - 1918). The unusual sculpture caused a public indignation because it was regarded as inadequate and consequently met with derision.

Only after quite some years could Klinger sell the sculpture to the city of Leipzig. From then on, his monument was seen as the ideal of a heroic Beethoven monument, showing the composer as an epitome of the human mind which can become godlike through achievement.