A time for experiments - I

Already during the first half of the 20th century, artists designing monuments for Ludwig van Beethoven were looking for new concepts. As many of the previously accepted forms and subject matters were being questioned due to the experiences of the Second World War, the search for new concepts even increased in the years after 1945.

Thus a number of new approaches were developed, quite different in their meaning and style. American sculptor Eugen Cuica (*1913), for example, chose purely abstract forms to express his veneration of Beethoven's music for his monuments.

Klaus Kammerichs: "Beethon" - Beethoven monument in front of the Beethoven Hall in Bonn (1986)

Sculptor Klaus Kammerichs from Düsseldorf went an entirely different way when focusing on Beethoven as a person. He created a large-format, three-dimensional version of the Beethoven portrait by painter Joseph Karl Stieler (1781-1858). Stieler's painting from 1820 is now one of the most popular and famous Beethoven depictions of the 19th century. 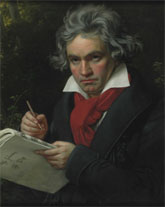 The monument erected by Klaus Kammerichs in front of the Beethoven Hall in Bonn in 1986 captures the whole basic difficulty a modern society experiences regarding the exposure to Beethoven as well as its opinion towards outstanding artists of the past. In his work, Kammerichs related to a portrait that influenced our idea of Beethoven's appearance like no other portrait. Therefore, the sculptor not only created a monument that looked familiar but also made it clear how strongly conventions and ideas from the past influence modern society in its view of Beethoven.