In portraits and monuments, outstanding musical achievements of a person were traditionally expressed by adding a lyre. This instrument, originally reserved for god Apoll and muses Erato and Terpsichore, can already be found in 18th century depictions of musicians and composers.

On the one hand, this motive should refer to the musical context. On the other hand, a concrete relation to the Olympian gods and muses should be established. Simultaneously, artists aimed at expressing music's divine source of inspiration. 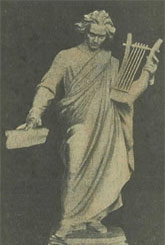 Beethoven as Apollo by Gustav Blaeser (around 1840) 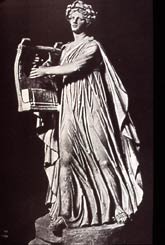 Apollo with kithara (first century BC)

On a painting by Willibrord Joseph Mähler (1778-1860) the 34 year old Ludwig van Beethoven already holds a lyre in his hand. In the monuments that were to be put up for Beethoven, the composer was soon equated with Apoll. In drafts from 1845, the composer is portrayed in the large coat so typical for ancient gods and holding a lyre and sometimes even Apoll's laurel wreath. The model shown here, created by Gustav Blaeser (1813-1874) for the Bonn Beethoven monument, is a typical example for this idea. 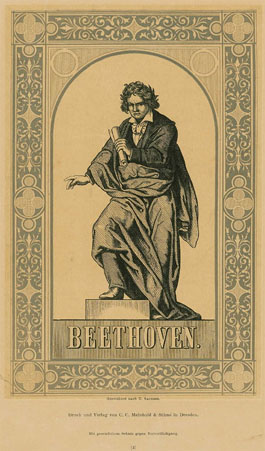 Draft for a Beethoven monument by Emil Eugen Sachse, woodcut from around 1890

Emil Eugen Sachse's (1828-1887) work clearly expresses the transition from the middle class Beethoven monument from around 1850 and the heroic interpretation that came up in the second half of the century. Beethoven is still portrayed in a standing position and wears the clothes typical for 1825. However, his coat is far more voluminous than in older drafts and resembles the robes worn by the ancient gods. The laurel wreath in his hands is another sign of this relation.