Beethoven monuments between tradition and modernity

The general veneration of Beethoven reached a second peak between 1920 and 1930. On the one hand this was due to the fact that 1927 was the 100th anniversary of Beethoven's death day. On the other hand, this intensive focus on Beethoven in Germany was a result of the traumatic experience from the First World War. After the military defeat, Germany reverted to cultural achievements in order to obtain national self-confidence. 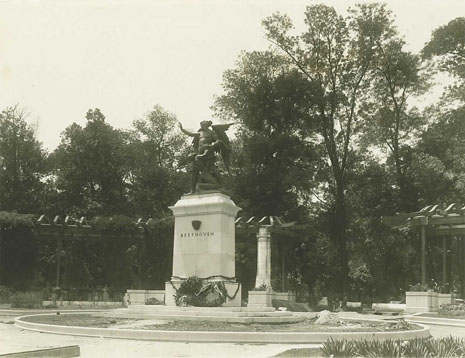 The monuments and monument drafts from this time are characterised by their concepts and style being very various. They share the intention of depicting Beethoven not so much as a person but instead show his music. Thus, quite different approaches resulted where Beethoven's artistic achievement was the main subject, whereas depicting the composer as a person was given less importance.

An example for such an approach is Theodor von Gosen's (1873 - approx. 1925) Beethoven monument in Mexico City. Allegorical elements, which in the 19thh century were typically part of a monument's pedestal area, became the most important part of the monument. A winged Genius is placed on a high pedestal. A figure - the suffering human soul - kneels in front of him and pleads for redemption. Beethoven's mask, which is attached to the pedestal, clearly suggests the message that redemption can be found in his music.