Further development of the Bonn type of monument

When designing the Beethoven monument for Bonn, Ernst Julius Hähnel used a monument type that was quite popular for the honouring of middle class artists, scholars and scientists in the 19th century. The depicted person usually stood with their legs slightly apart on a more or less square pedestal which was decorated with inscriptions and reliefs. In most cases they wore contemporary clothing as well as a large coat to enlarge them optically and render them more monumental. 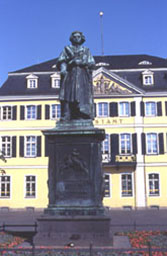 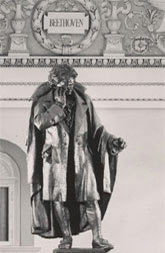 Theodore Baur´s Beethoven statue at the Library of Congress Washington D.C. (second half of the 19th century)

This way of depiction was popular all over Europe and continued well through the first half of the 20th century. German-American sculptor Theodore Bauer (1835-approx. 1902) reverted to it when creating the Beethoven statue for the Library of Congress in Washington D.C.