While Max Klinger and Fidus developed their romantic ideas of Beethoven as a "superman", other artists created their own concepts for a Beethoven monument. Some of these drafts and models strictly followed the traditional types and forms of the 19th century. Other artists tried to break new grounds. 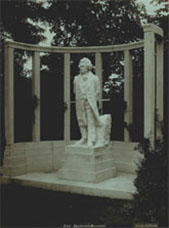 Of particular interest is the Beethoven monument erected by Robert Weigl (1851/52 - 1902) in Vienna-Heiligenstadt. Weigl's approach was clearly different from the concepts of the late romantics and is more conform to the naturalistic idea of the mid 19th century.

Weigl used a lithograph by Martin Tejcek (1780 - 1847) that shows Beethoven on a walk as model for his Beethoven figure. The artist created his sculpture closely following the depicted Beethoven and thus achieved a very realistic effect. His monument should give the beholder the impression as if he had just met Beethoven on a walk. Here, Beethoven is shown in an entirely human way.

Only a few years after this sculpture was put up, such a concept was regarded as not monumental enough. As a consequence, a peripteral enclosure was built around the statue to separate it from the beholder's world.