A time for experiments - II

For its first public presentation, the Beethoven monument by Klaus Kammerichs was not yet called "Beethon" as it is today but "Mythos Beethoven" (Beethoven Legend). The monument was created with the intention of expressing the difficulty that arises when dealing with Beethoven these days. 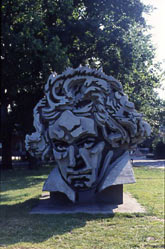 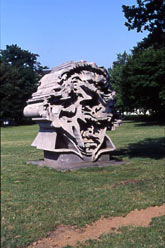 The history of the Beethoven monuments of the 19th and 20th century not only mirrors the development of an art genre but is closely linked to the way how Ludwig van Beethoven was revered during the various epochs. All monument projects also express the general opinion the broad public had about Beethoven.

The fact that the first efforts to create a monument for the dead composer go back to only a couple of years after Beethoven died, and that memorials and monuments are still erected, gives clear evidence that the composer's charisma and the influence of his music still prevail until today. On the other hand, it shows how strong the general need was and is to honour an outstanding composer with a public monument. We can expect with great expection how monuments for Beethoven will look like in the third millennium. 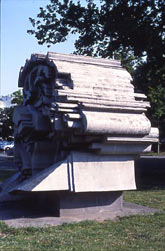 Klaus Kammerichs: Beethoven monument (side view) in front of the Beethoven Hall in Bonn (1986)
Zurück Weiter