Bourdelle's fascination for Beethoven continued until the sculptor died. During the last five years of his life, Bourdelle produced no less than six busts and sculptures showing the composer. 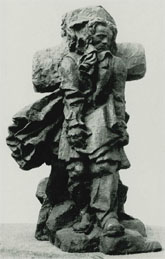 This figure named "La Pathétique" or "Beethoven à la croix" is Bourdelle's last work. It shows how strongly Beethoven epitomised the suffering and struggling genius in the eyes of the late 19th and early 20th century artists. The symbol of the cross proves that the composer was not only identified with pagan deities but was also interpreted as the suffering redeemer in a Christian sense. In this way, Bourdelle's works also express an intimate avowal of his own self and his self-conception as a creatively working and struggling mind.