The time of the great Beethoven monuments

The tradition of plain monuments showing a standing Beethoven on a more or less high pedestal continued well through the second half of the 19th century. At the same time, quite a different and much more monumental style developed where the composer usually sat in an armchair or on a throne. 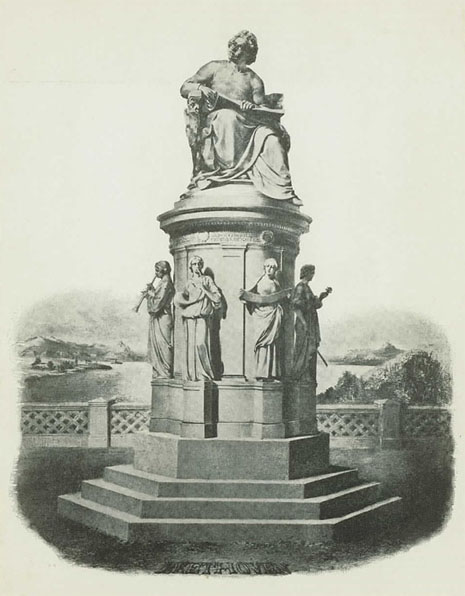 Friedrich Drake´s draft for a Beethoven monument (around 1840-45)

As one of the first artists, sculptor Friedrich Drake from Berlin (1805-1882) designed such a monument. Drake probably began developing his ideas shortly after Beethoven's death in the 1830s. When the competition for the Bonn Beethoven monument was held, he submitted a draft which is characterised particularly by a lavishly decorated pedestal and the fact that Beethoven is shown in a sitting position.

Although Drake's draft was regarded as too heroic and therefore not chosen by the monument committee, his basic concepts should lay the path for the further development of the Beethoven monuments of the late 19th century.