Living conditions in Vienna at Beethoven's time were far different from today and thus cannot be compared directly. To get an objective picture, Beethoven needs to be seen within his time. The then cost of living mainly comprised expenses for food, rent and clothing. In his "New Sketch of Vienna" from 1804 contemporary Johann Pezzl concluded that the minimal expenses for a man living by himself, without any splendour or posh public office and only socialising with the middle classes amounted up to 967 florins. However, if one includes theatre visits now and then and other public or private amusement, less than 1,200 florins a year are not sufficient. To be able to compare this information with today, such "amusement expenses" will have to be included. But even then 41 % were still spent on food (without taking any spare time activities into account this was 52 %) while modern society spends only a fifth on food. Clothing, with 19 %, was significantly more expensive than today (6 %), too. Unlike then we now spend more money on rent and additional costs (37 % today versus 14 % back then). If calculating the budget for 1809 and taking into consideration the price development for food and rent, a total of 1,600 florins results. The financial support Beethoven initially obtained from his patrons was thus more than twice the budget a middle class man disposed of. In the most extreme years of 1816 and 1817, the composer's salary of 3,400 florins was even below Pezzl's budget of about 3,750 florins. 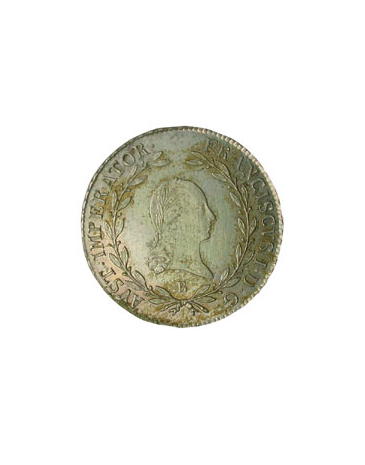 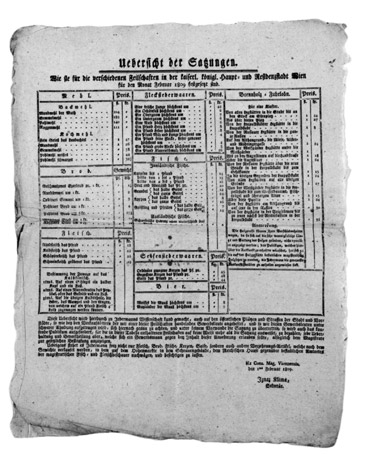 Pezzl´s list shows why food prices were so significant. While contemporary documents of Beethoven´s early Vienna years already indicate a noticeable price increase for food, the situation worsened during the occupation of Vienna by French troops in May 1809 and finally led to bottlenecks in supply. In the second half of the year food prices rose by 50 %. Prices for flour, bread, meat, fish, candles, soap, beer and firewood were fixed by the government. When even these were raised, life became more and more difficult. In February a pound of beef cost 18, in September already 27 kreuzers. All other prices were adapted to the market situation and hardly affordable for the broad population.
Beethoven reports the same. To explain why he insisted on receiving his remuneration for a composition in Convention coins, he wrote publisher Breitkopf & Härtel from Leipzig that a pair of boots now cost 30 florins, a coat between 60 and 70 florins and that due to the French occupation his annual salary of 4,000 florins had lost its value and was barely worth 1,100 florins in Convention coins. In 1792 Beethoven noted 6 florins for a pair of boots, in 1810 they cost 30 florins - a five-fold price increase. 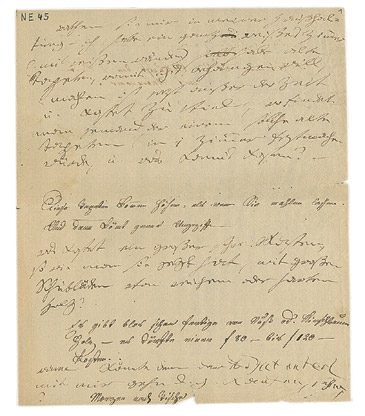 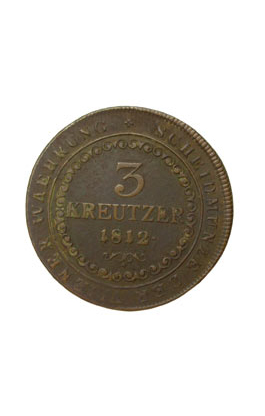 Even though the increase of food prices was far quicker and more irregular than of rents, these were also subject to inflation and price rise. In 1816, Beethoven paid a rent to Count Lamberti that was ten times higher (1,100 florins in Vienna currency equal 5,500 florins in Banco-Zettel) than the rent he paid six years earlier at the Pasqualati house (500 florins, Banco-Zettel).

The extensive correspondence with Nannette Streicher, owner and the driving force of a leading Vienna piano manufactury shows that Beethoven often sought advice in household matters.
Music publisher Tobias Haslinger, a friend of Beethoven, helped him move from his summer residence to his town residence in October 1817. It might be possible that Beethoven asked for advice on wallpaper and chest of drawers on this occasion.