The polonaise op. 89, composed especially for the Tsarina, might have been a token of gratitude for her noble contribution to his Academies during the Vienna Congress. However, the composer also received 50 ducats as a gift for the dedication. She additionally paid him 100 ducats for the violin sonatas op. 30 published in 1803 and dedicated to her husband Alexander I. These are the only dedications that resulted in a payment for Beethoven even though the composer dedicated some more pieces with probably the same intention to others. 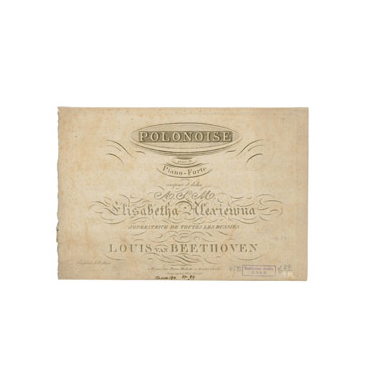 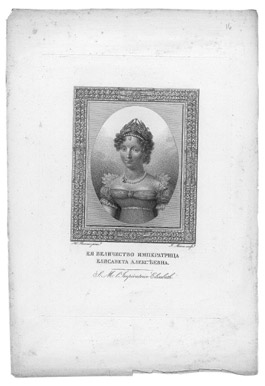 When dedicating the battle symphony "Wellington's Victory" op. 91 to the Prince Regent of Britain, the later King George IV, Beethoven certainly hoped for a generous remuneration. Unfortunately, his hopes were in vain, despite numerous later tries to remind the king of this omission. The dedication of the Ninth Symphony op. 125 to Prussian king Friedrich Wilhelm III did not fulfil Beethoven's intention either. While he had hoped for a medal, he simply received a ring of minor value and a plain thank-you note. Despite such disappointments, Beethoven profited from dedications as they enhanced the value of a composition in the public's eyes. Of course, he dedicated many pieces to his patrons as a token for gratitude. In general, dedicating a composition was not only a positive deed for the composer and enabled him to demonstrate his admiration in public but also for the recipients who felt adorned through "their" piece. The dedications to the composer's noble patrons outnumber those to his friends by far. 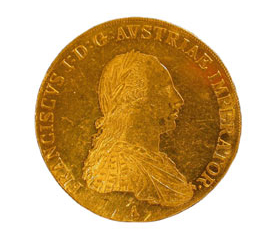 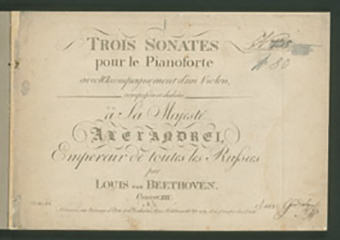 The few ordered works were composed for noble customers (string quartets opp. 127, 132 and 130 for Prince Galitzin, Mass op. 86 for Prince Nikolaus II. Esterházy), music societies (Ninth Symphony for the London Royal Philharmonic Society), theatres (such as the play music opp. 113 and 117 for the theatre in Pest) and publishers (for example the adaptation of folk songs for the Scottish publisher George Thomson). With regard to the fee Beethoven charged, the order of the Society of the Friends of Music in Vienna to write an oratorio for Carl Bernard's text "Der Sieg des Kreuzes" (the victory of the cross) is most noteworthy. Despite an advance payment of 400 florins Vienna currency and a fixed remuneration of 300 ducats, Beethoven just outlined a short sketch. He did not like the playbook. This example is quite illustrative that it was art, not money that reigned in his world.