Not only for the payments from Lobkowitz did the composer have to ask the court for help but also for the payments from Prince Kinsky. Although Kinsky had ordered his cash office in January 1812 - and therefore before Beethoven asked him to ignore the table - to pay out Beethoven's salary using the table, the payments were delayed for quite a while. On November 2nd, 1812, Kinsky died after an equestrian accident. Beethoven now asked Princess Karoline Kinsky for a payment of the due sums in redemption coupons. The princess, unfortunately, was not able to make a decision without the consent of the guardianship authority. Eventually, Kinsky's share was determined 1,200 florins Vienna currency from the Prince's death day onwards by the court.

The receipt refers to the first payment after the court's decision. The scholarship was to be paid in two instalments of 600 florins each. On a form, Beethoven had to issue a receipt that - apart from seal and his signature - also had to consist of a certificate that the recipient of the payments was a living person (issued by a rectory serving as a registry office). 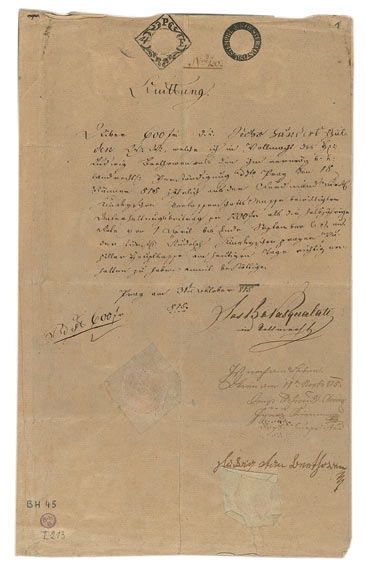 Kinsky's payments were often delayed. In order to accelerate the process, Beethoven authorised his lawyer Nepomuk Kanka who had represented him during the trial.
At first the Prague bank Ballabene was to implement the payout but Beethoven informed Kanka in a letter that Pasqualati had just told him after one month and six days that Ballabene was too influential for this matter and that he would now have to draw on his lawyer to obtain his receivables. 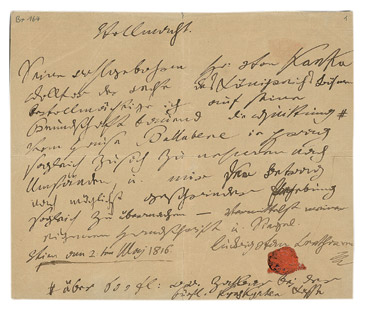 Authorisation for Kanka in Prague

On May 1st, 1816, Beethoven also wrote Kanka about his intention to dedicate a composition to Princess Kinsky and ask for the payments he was entitled to in a letter. Such a letter does not exist and therefore might never have been written. After the tedious negotiations regarding his salary, the composer should have known that any new try would also fail. Thus, he gave the composition the self-explanatory title "To hope". 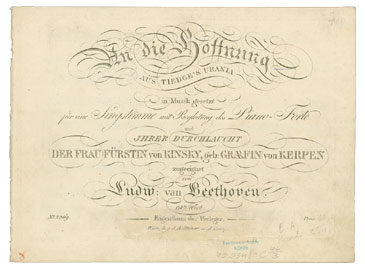