Beethoven now tried to convince his patrons to ignore the table and pay him the respective sum not in Banco-Zettel but redemption coupons. Although according to Beethoven's assurance initially all three patrons gave their consent, only Archduke Rudolph granted Beethoven the full amount. 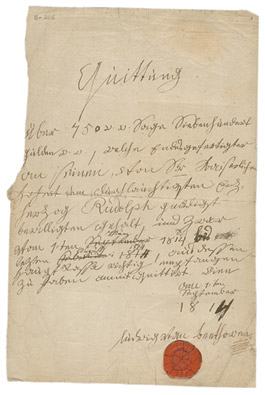 Due to the aggravated economic conditions Prince Lobkowitz had become highly indebted. His payments to Beethoven stopped in September 1811. On June 1st, his assets were put under "amicable administration", half a year later under state administration. The Prince lost the right to dispose over his property and belongings, had to dissolve his band and leave Vienna. 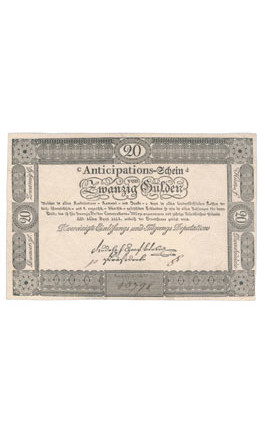 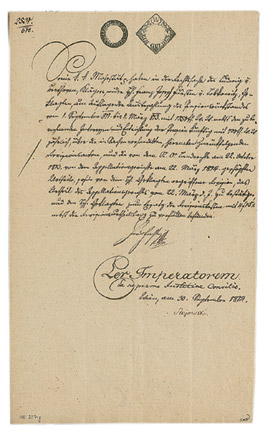 Files for the trial against Prince Lobkowitz

In light of an imminent bankruptcy Beethoven filed a complaint against Prince Lobkowitz at the Lower Austria County Court that was allowed at first instance. On October 22nd, 1813, Lobkowitz was sentenced to pay the due as well as the future pensions in full face value of the Vienna currency. The opposing party then filed an appeal at the Appellate Court of Lower Austria and on March 22, 1814, Prince Lobkowitz was given the opportunity to rebut Beethoven's proof - a verbal promise of the Prince - by taking an oath. As part of his appeal Lobkowitz contacted the Emperor who, however, confirmed the decision of the Appellate Court. Because Lobkowitz refused to take an oath at court, the original verdict came into force on April 19th, 1815, and Beethoven received the due sum in three instalments until the end of August of the same year.