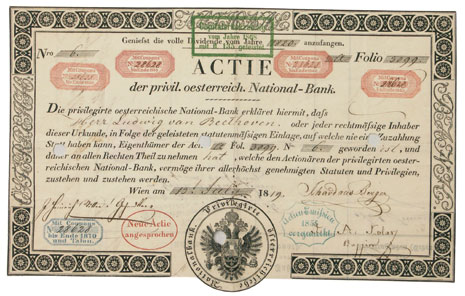 Beethoven repeatedly used his shares as security for loans, he lend on them and later amortised them. Furthermore, he received an annual dividend of 30 fl. Convention coins, paid twice a year in January and July. He obtained an additional payout of the bank's gains in the form of an exceptional dividend after the annual balance of accounts in January. The capital gain was immense: Between 1819 and 1825, the price for one share more than doubled from 500 fl. to 1,202 fl. Because Beethoven always considered the share as inheritance for his nephew Karl and thus not intended for sale, he preferred contracting debts to reducing this fortune. Despite his intention, he had to sell one share in September of 1821 as his financial situation had drastically worsened due to a prolonged sickness.


In January 1827, Beethoven declared his nephew Karl the sole heir of his belongings and seven bank shares. After consulting with his legal counsel Bach and Stephan von Breuning - then Karl's custodian - he added the following a few days before his death: "My nephew Karl shall be the sole heir, the capital of my inheritance shall be given to his natural or testamentary heirs." As it was feared that Karl would support his highly indebted mother with Beethoven's inheritance, he should only receive the earnings while the capital was intended for his own heirs. Apart from the two shares now owned by the Austrian National Bank, two other shares are at the Vienna City and State Library. In 1864 and 1874, the Deposits Office handed both shares over to Karoline Johanna van Beethoven, daughter of Karl and Caroline Barbara (born Nasken) van Beethoven.
The shares of which only a few friends and his brother knew were the main part of Beethoven's inheritance (73 %). The composer led a rather frugal life and spent only minor sums on luxury articles, died as a rich man. Just 5 % of the Vienna citizens left a similar or higher fortune, 77 % left only a tenth or less. Based on the conversion factors calculated by Roman Sandgruber and under reserve, Beethoven's inheritance can be estimated at around 145,000 Euro. To compare: Bandmaster Antonio Salieri left three times as much, Joseph Haydn, bandmaster and "private composer" for Prince Esterhazy twice as much.
Beethoven certainly did not lack anything and was not an impoverished artist. Still, his repeated complaints are to be taken seriously as they show that he always worried about his financial situation since he did not have a permanent employment. Whatever the case may be, he was able to fulfil his wish of living an independent life, especially in an art-related aspect.