As it was customary for that time, Beethoven also organised concerts. Concerts for the benefit of a musician or composer, the so-called "Academies" always came with a high financial risk. Usually, the composer whose latest works were played or the virtuoso who wished to demonstrate his ability to the audience, served as the organiser himself which led to an additional workload often regarded as cumbersome and particularly tedious. The organiser's duties included the creation of the programme, selection of musicians, announcing the event as well as arranging advance bookings. Apart from that a suitable place had to be found - usually a theatre or multi-purpose hall such as the Redouten Hall - and rented. The first public hall used only for concerts was built no earlier than 1831 by the Society of the Friends of Music, founded in 1812.
Beethoven managed to organise the National Court Theatre next to the castle for his first own Academy on April 2nd, 1800. The fact that he had dedicated his piano sonatas op. 14 to Josephine von Braun, wife of the director of both court theatres, one year earlier certainly helped him. The programme featured a symphony by Mozart, two pieces from Haydn's Creation, a piano concert by Beethoven (probably number 1, op. 15), his Septet op. 20 and the First Symphony op. 21 as well as a free piano fantasy. Such long, mixed programmes where the instrumental compositions were interrupted through short vocal pieces were quite usual. Financially seen, the concert was probably successful although Beethoven did not follow the conventions and only charged an entrance fee "as usual".
The upbeat mood he spread in a conversation with his boyhood friend Franz Gerhard Wegeler regarding his future in Vienna in June 1801 and his hope to hold an Academy at the theatre each year, speaks for a successful concert. However, the remaining 26 years in Vienna would see only eight concerts for Beethoven's benefit of which only four proved financially successful. But these Academy concerts always represented an occasion for quite generous contributions made by the nobility. 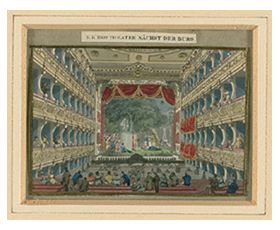 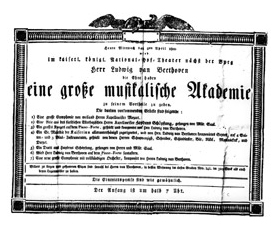 Placard for the Academy concert on April 2nd, 1800

The best known examples are the concerts that Beethoven held during the Vienna Congress. Between September 1814 and June 1815 the leading European regents convened in Vienna. Their entourage included diplomats and aristocrats. An extensive programme with balls, opera performances and concerts was organised. After the success of "Wellingtons' Victory or the Battle of Vittoria", op. 91, that hit the patriotic nerve of that time, Beethoven seized the opportunity once more and swiftly composed the grandiose cantata "The Glorious Moment", op. 136, following only commercial aspects. On November 1814, "Wellington's Victory" and the Seventh Symphony were performed once more together with the new cantata in front of an enthusiastic audience and the heads of government. The concert was repeated for Beethoven's benefit on December 2nd and to the benefit of the St Marx hospital on December 25th. The expenses for the first two events amounted to 5,108 florins Vienna currency. The fact that Beethoven made more money through his concerts in 1814 then in all other years together is certainly due to the generous support of the Russian Tsarina. The Vienna magazine "Friedensblätter" from December 24th, 1814 wrote she gave Beethoven a generous donation of 200 ducats. 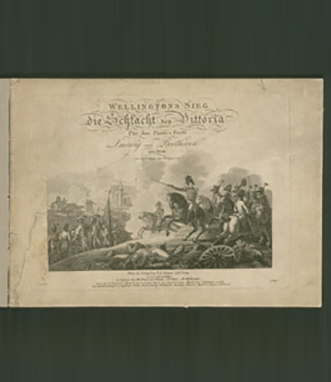 "Wellington's Victory or the Battle of Vittoria", op. 91 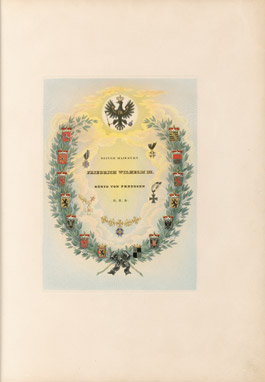