Conclusion of the "annuity agreement"

In the autumn of 1808 Napoleon's brother King Jerome Bonaparte of Westphalia offered Beethoven the position of bandmaster at the Kassel Court for a generous annual salary of 600 ducats. Beethoven spread this news in Vienna and quickly added that he was willing to accept. Ignaz von Gleichenstein and Countess Erdödy then made an effort to keep Beethoven in Vienna. The composer was asked to name his conditions and Gleichenstein included these in a draft agreement. Apart from 4,000 florins a year, Beethoven also demanded the right to undertake art journeys, the title of Imperial Bandmaster and an annual concert for his own benefit at the Theatre an der Wien. 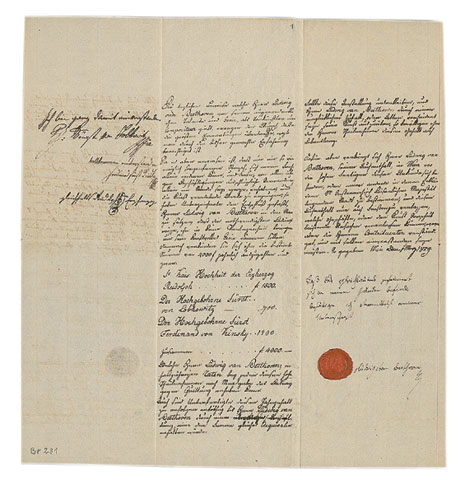 The efforts were rewarded and three patrons were found to raise the sum demanded. The draft agreement was reduced to the essential and signed by Princes Kinsky and Lobkowitz as well as Archduke Rudolph a few days before the indicated date as a so-called "Annuity contract". The three signatories obliged to pay Beethoven an annual amount of 4,000 florins in bank notes (Banco-Zettel) his life long unless the composer found a permanent employment. It was their belief that only a man free of worries was able to compose such great and outstanding works and thus the signers decided to enable Ludwig van Beethoven to fulfil his most relevant necessities and to not inhibit his powerful genius. In exchange, Beethoven promised to stay in Vienna or Austria at least. 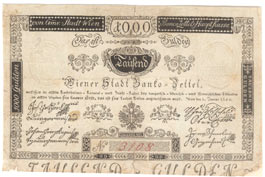