After three years Beethoven asked Steiner for a return of his invested capital - Steiner did not subtract the composer's debts - and bought eight bank shares of the Austrian National Bank on July 13th, 1819. When Beethoven did not make the stipulated repayments, Steiner reminded him politely but with emphasis at the end of 1820. Obviously, Beethoven had bitterly complained about the previously set interest rate of 6 %, which was even less than the fixed interest rate for his capital investment.
"I cannot be content with your conclusion on my bill as I charged you 6 % interest on lent money while giving you 8 % on the money you invested and paid these and your capital in a timely manner. What's sauce for the goose is sauce for the gander. I am not able to offer loans without interest. I served you as a friend in need, trusted your word, have neither been intrusive nor bothered you and must so reject the reproaches thrown at me. - If you consider that my loan to you now nears its fifth year, you will see that I was nothing more than an intrusive creditor. Even now, I would spare you and be more patient if I were not in need for money. - If I were less convinced about your help and word, I would offer you more time despite the hardship on me. 17 months ago I returned 4000 florins Convention coin or 10000 florins Vienna currency as capital and did not subtract my outstanding money it now seems double the pain to be in need for money after trusting your word and despite my good will. Each knows best where the shoe pinches and so I conjure you not to let me down and find means to pay my bill as quickly as possible.-" 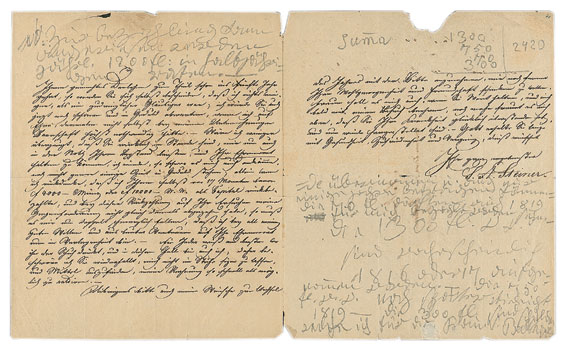 Beethoven noted down his thoughts on origin and composition of the debt that amounted to 2,420 florins Vienna currency:
"1300 fl. were probably taken up in 1816 or 17; - 750 fl. Vienna currency even later, perhaps 1819; - 300 fl. I took up for Mrs. v. Beethoven a few years ago; - 70 fl. were probably paid for me in 1819 too."
The first item is the loan Beethoven received on May 4th, 1816, the second one the loan from October 30th, 1819. The amount of 70 fl. might be identical to 72 fl. Steiner paid to Bernard in August of 1816 on Beethoven's behalf. The last amount of 300 fl. was owed by Johanna van Beethoven in 1818. On January 8th, 1814, Beethoven told her in a letter that he had amortised the debt.
Regarding debt amortisation, Beethoven wrote the following:
"Aside: For payment 1200 fl. can be authorised annually in two instalments. -"
All in all, Steiner had added an interest amount of 520 fl. Vienna currency (1,200 fl. Convention coins equal 300 fl. Vienna currency). In the end, Steiner had to wait until the summer of 1824 until he received the repayment of all loans. 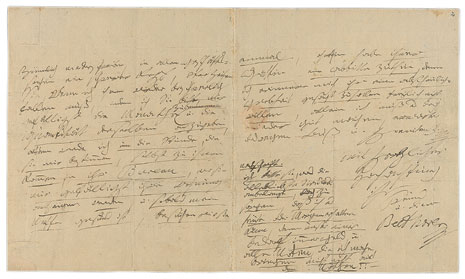 Letter to Salzmann around February 8th, 1823

In 1823, Beethoven sent a letter to Franz Salzmann, then chief accountant at the Privileged Austrian National Bank in Vienna. The composer owed 100 fl. to his tailor who had already threatened to file a complaint. Apart from the fact that Beethoven wanted to pay at least a part of the money back Franz Brentano had lent him three years ago as advance payment of the expected remuneration for the Missa Solemnis. Before lending on his shares again, he wanted to receive the due dividend. Therefore, he informed Salzmann: "I am in need of your help again as I can only write down some music. Excuse the inconvenience of asking you to name the months and quantity." And postscript: "With regard to the wonderful dividend, I am asking you to arrange for it to be paid today or tomorrow as one like me always is in need for money and all these musical notes don't pay my needs!!" 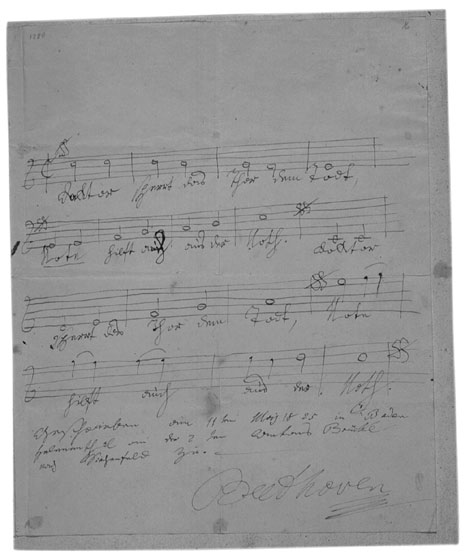 The pun of the German words "Note" (musical note) and "Not" (distress, hardship) was often used by Beethoven, for example in the canon he sent to his doctor Anton Braunhofer in May 1825 after his convalescence: "Doktor, sperrt das Tor dem Tor - Note hilft auch aus der Not" (Doctor, shut out death - notes save from distress). Braunhofer had asked Beethoven for "a few insignificant notes"; he mainly wanted something handwritten from Beethoven. In this case, the German word "Not" (hardship, distress) obtains a double meaning: One the one hand composing musical notes ("Note") helps Beethoven out of his financial distress ("Not"), on the other hand it also eases his psychological distress caused by the prolonged sickness.