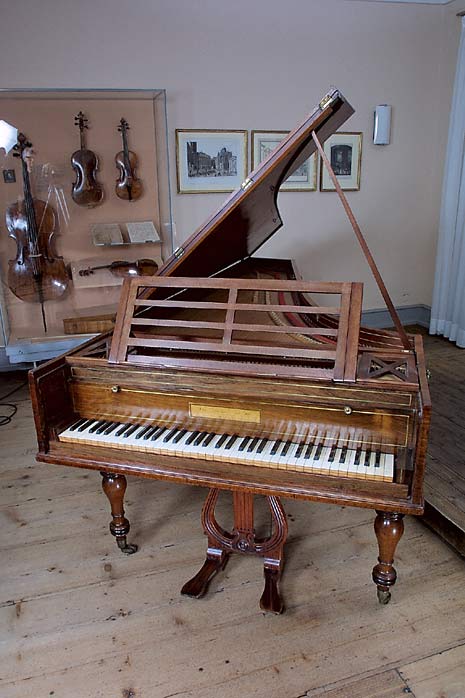 Thomas Broadwood, the most productive piano manufacturer of that time in London, gave Beethoven a piano forte in 1817. For this purpose he had invited five of the most important London musicians to his shop to choose a suitable instrument for the cherished master. Above the company label on the front edge of the pin block the following text can be read: "Hoc Instrumentum est Thomae Broadwood (Londrini) donum propter ingenium illustrissime Beethoven." [This instrument is a proper gift from Thomas Broadwood of London to the great Beethoven.] Next to it Friedrich Kalbrenner, Ferdinand Ries, Johann Baptist Cramer, Jacques-Godefroi Ferrari and Charles Knyvett signed the instrument. Many years later the Vienna music publisher Carl Anton Spina gave the piano to Franz Liszt who then dedicated it to the Hungarian National Museum. The displayed instrument, constructed in the same way, is owned by the Beethoven-Haus. 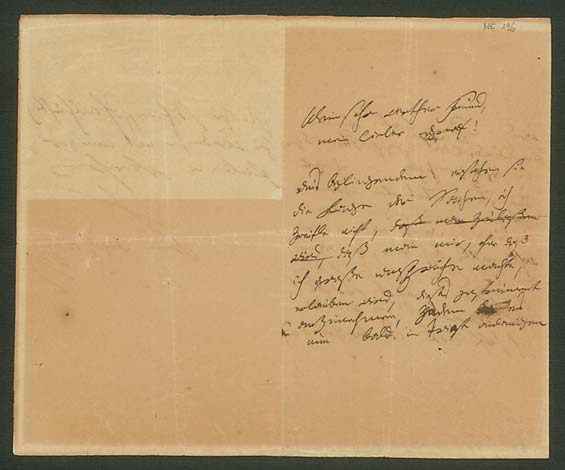 Broadwood notified Beethoven in early January 1818 that the instrument had been dispatched on December 27th. Beethoven immediately contacted Count Moritz Lichnowsky and asked him to speak with the finance minister on his behalf so that he would be allowed to obtain the instrument free of custom fees and other charges. As can be seen from the article published in the Vienna newspaper on June 8th Beethoven's wish was granted: "Mister Ludwig van Beethoven, cherished not only in Austria but also abroad for his great musical genius, received a rare and precious piano forte from a London admirer as a gift, delivered to Vienna free of charge. With particular generosity the court chamber of the dual monarchy dispensed with custom fees that are usually applied to foreign musical instruments, and hence proved in a way pleasant for the arts that one strives to encourage such seldom merits of genius by humane appreciation."

Beethoven effusively thanked the authorities for the "honourable gift": "I will regard it as an altar on which I will offer to god Apollo my most beautiful sacrifices of spirit."