The Philharmonic Society, founded in London in 1813, became Beethoven's most important institutional partner in England. The mission of the society, mostly based on private initiative, was to hold concerts on the highest professional level. Many people of importance to Beethoven held relevant positions: The often mentioned musicians Sir George Smart and Ferdinand Ries belonged to the group of directors, and piano and cello player as well as composer Neate was one of the founding fathers. The first concerts each had a composition of Beethoven as the core. In most cases this was a symphony or other composition such as the popular septet op. 20 or the quintet op. 29. The mixed concert programme typical of that time also featured compositions by Cherubini, Mozart, Haydn and Boccherini. In 1815 the Philharmonic Society bought three pieces from the work series Beethoven had offered to Smart and Salomon for publication in England: The overtures for "The ruins of Athens" ("Die Ruinen von Athen") op. 113 and "King Stephan" ("König Stephan") op. 117 and the "Name Day Overture" ("Zur Namensfeier") op. 115. In the same year Neate stayed in Vienna where he visited Beethoven. When he left for London in February 1816 he took several compositions to present them in the concerts of the Philharmonic Society and/or offer them to London publishers. Beethoven also hoped for a beneficiary concert to his avail. Unfortunately, he was disappointed and felt betrayed after he had not heard anything from Neate for months but had read about a successful performance of his symphony in London in the press. It cannot be said for sure if the symphony presented was indeed the new Seventh Symphony or the often performed Fifth Symphony.
In the following year the Philharmonic Society invited Beethoven to London. "We would like to have you with us here in London next winter", wrote Ferdinand Ries on June 9th, 1817. The flattering introduction reads as follows: "The Philharmonic Society where your compositions are preferred to any other wishes to give you proof of its admiration and gratitude for the many wonderful moments we were able to enjoy thanks to your exceptional compositions of genius." The society was willing to pay Beethoven 300 guineas for a season-long stay in London and for the compositions of two symphonies that should then be the property of the Society. During his stay he would be able to give other concerts on his own which would be a nice source of additional income. Beethoven requested an additional minimum remuneration of 100 guineas to cover his travel costs that might be higher because of a necessary travel companion. The Society refused his request and the journey never took place, certainly also due to Beethoven's bad state of health and the concerns for his nephew.
Still, Beethoven intended to visit England and told Ries in 1822 in a letter: "I am still playing with the thought to come to London, if only my health permitting; possibly next spring?" On this occasion he also asked Ries the following: "What remuneration would the Harmonic Society give me for a great symphony?" Ries forwarded the composer's inquiry and in the first session of the season in 1823 the directors decided in favour of Beethoven:
"10. November 1822
Resolved that an offer of £ 50 be made to Beethoven for a M[anu].S[cript].Sym[phony]. He having permission to dispose of it at the expiration of Eighteen Months after the receipt of it. It being a proviso that it shall arrive during the Month of March next."
According to the minutes a remuneration of £ 50 was offered to Beethoven for a new and yet unprinted symphony, given that the manuscript would be received in the month of March. Beethoven would then (as opposed to the offer of 1817) have the full rights of the composition after 18 months. Ries informed Beethoven of the decision five days later.

Minute book of the board of the Philharmonic Society, 1822 to 1837, entry from November 10th, 1822 The British Library
In early 1823 the Philharmonic Society also bought the overture "Consecration of the house" ("Die Weihe des Hauses") op. 124 for £ 25. A copy was delivered by the London envoy secretary Caspar Bauer. In the end of February he notified Neate to send the symphony the same way as soon as he would receive the remuneration. At that time op. 125 had only been sketched and composed partially. Apart from that Beethoven expressed his hope to be able to visit London next year when he felt better: "England I would like to see and all the wonderful artists there. For me it would be of favourable as I can never achieve anything in Germany."

Letter to Charles Neate dated February 25th, 1823
The completion of the symphony was delayed. In several letters from 1823 to Ries Beethoven over and over again gave new excuses. In the beginning of September he promised messenger Franz Christian Kirchhoffer, employee at the Vienna bank Hofmann & Goldstein, to deliver the manuscript within the next two weeks. As can be seen from the receipt, Kirchhoffer had to wait for almost another eight months. 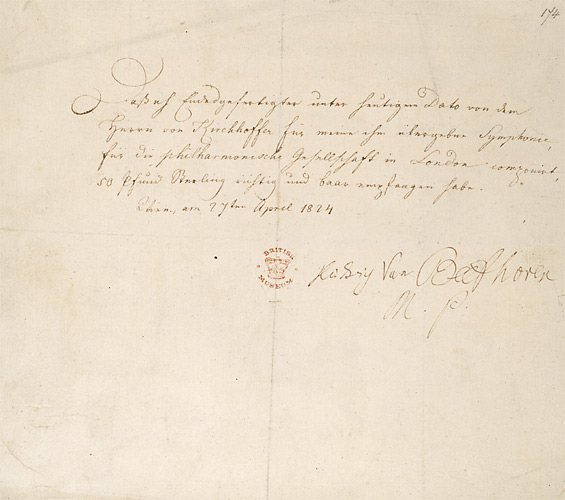 Receipt signed by Beethoven, April 27th, 1824 The British Library
Neate confirmed receipt of the score eight moths later on December 20th, 1824. The copy corrected by Beethoven bears the following title written by the composer: "Great symphony written for the Philharmonic Society in London.- by Ludwig van Beethoven First movement". The final part shows the handwritten German original text. An English and (incomplete, partially free) Italian translation was added in London. Schiller's "Ode to Joy" was performed in this language, particularly suitable for singing. 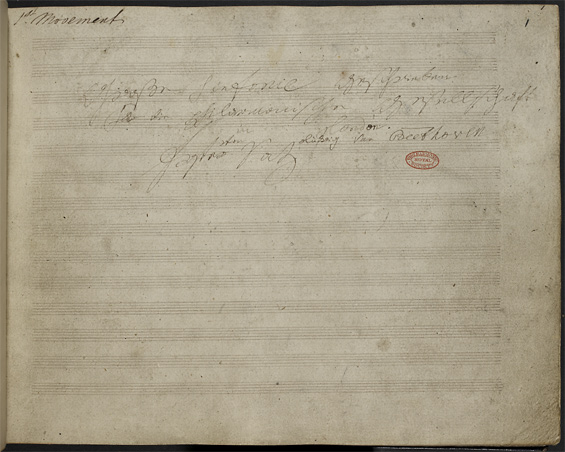 Copyist´s score of the Ninth Symphony corrected by the composer, 1824 The British Library
Zurück Weiter