After agreeing on a remuneration of four ducats for each song adaptation in 1814 Beethoven requested a subsequent payment for three Scottish songs delivered later (Thomson regularly asked Beethoven to facilitate his compositions). In a letter from March 1818 Beethoven claimed he had only received three ducats instead of the determined remuneration. Thomson, however, replied that the bill issued by the Fries bank certainly stated 12 ducats. Either Beethoven was mistaking or Fries had written the bill only after Beethoven had asked him to do so.
Beethoven also mentioned that he had the English texts be translated, thus it can only be pieces that were already published in the "Irish Songs" or "Welsh Songs". Probably the translations were done for a planned publication by the Vienna publisher Steiner. Beethoven offered Thomson piano variations on these melodies at a price of nine ducats each. 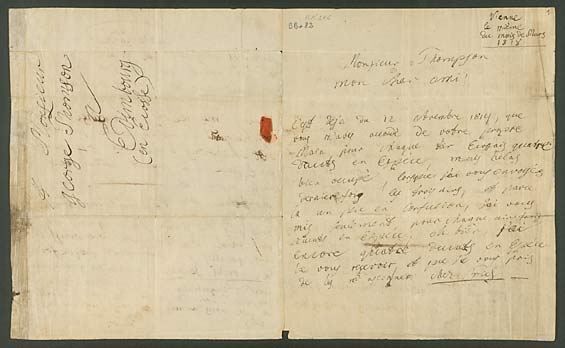 Letter to George Thomson dated March 11th, 1818
The fifth and last volume of the "Scottish Songs" series published in 1818 contains apart from Beethoven's 25 Scottish songs op. 108 four songs by Joseph Haydn and the quite popular cantata "The Jolly Beggars" by Robert Burns with a melody by Henry Rowley Bishop. Beethoven had rejected the composition before. Thomson had asked both to compose the violin part in such a way that it could also be played with a flute. He hoped this would increase sales. The sales of Beethoven's song adaptations were far below the sales of the first editions featuring adaptations by Haydn and Kozeluch. The editor believed Beethoven's complex style was the reason for the decreased revenue. In his last letter to Thomson from May 1819 Beethoven, now angry at Thomson for his ongoing request for simplicity, explained that he could not regard this as a criterion and that he hardly found the courage to call the pieces his own.

Original edition of the "Scottish Songs", 5th volume, 1818
As already mentioned Beethoven, who was quite an adept businessman in using his compositions several times, later tried to sell the compositions also on the Continent. He did so in Berlin in 1820. Publisher Adolph Martin Schlesinger showed an interest in the songs and arranged a German edition in 1822. One copy created by two different copyists, reviewed and corrected by Beethoven, was used for the engraving. Franz Oliva, a friend of Beethoven and his voluntary secretary, underlaid the English text of the songs. Schlesinger commissioned Samuel Heinrich Spiker, publisher and librarian of the Berlin Royal University, to translate the text into German for later addition.

Corrected copy of the Scottish songs for voice, piano, violin and violoncello, op. 108 for the German edition
To facilitate the marketing of the songs on the German market Schlesinger had the edition be printed bilingual in English and German. Originally, the songs were written in a Scottish dialect, something which did not make translating them an easy task. Thus, the German translation is not always the best. Beethoven recommended Schlesinger to commission Carl Friedrich Zelter, a close friend of Goethe, to correct the translation but the publisher decided in favour of the original translation.

Bilingual edition of the "Scottish Songs" op. 108
During the adaptation of the folk songs Thomson had asked the composer to select a few European folk songs for adaptations. However, it proved impossible to underlay these with English poetry. In 1818 Thomson commissioned Beethoven to compose variation cycles for piano with flute on some of these and other subjects that had partially been published as song adaptations before (op. 105 and op. 107). Displayed are Russian subject "Beautiful Minka" and the first variation on the Welsh melody "Peggy's Daughter". Beethoven wrote: "for the subject the flute in 8va plays with the piano but only the melody" ("zum Thema die Flöte in 8va mit dem Klawier jedoch nur mit der Melodie"), wherever the flute is not mentioned it plays the piano's melody part. The side remark is from Beethoven's secretary Anton Schindler who dated the handwriting too early: "Side remark: This composition by Beethoven dates [crossed out: "either"] from 1816. [crossed out: "or 1819"] A. Schindler." ("Nb. Diese Komposition Beethovens fällt [crossed out: "entweder"] in das Jahr 1816. [crossed out: "oder 1819"] A. Schindler.") 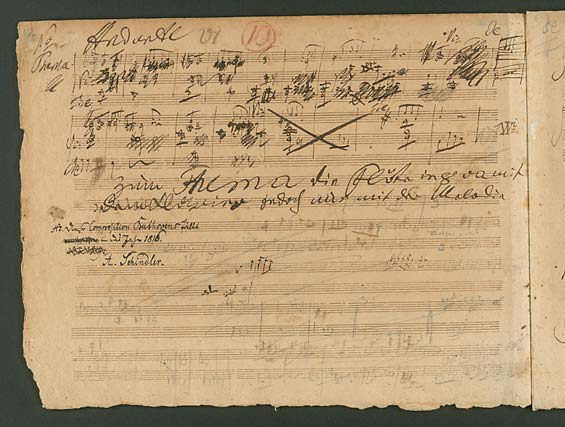 Autograph of the variations op. 107 No. 6 and 7, subject "Beautiful Minka"
In 1819 Thomson published nine of the delivered piano variations. According to the title 12 were planned originally. The collection was published in three booklets richly adorned with copper. It contains three Irish, three Welsh (among them as No. 8 the subject shown above), one Scottish, one Austrian and one Russian subject ("Beautiful Minka" as No. 7).