Already at the age of thirteen, Muzio Clementi, born in Rome in 1752, was "bought" for seven years by an English traveller who noticed Clementi's exceptional talent as organ and harpsichord player, and spent this time on an English country estate, deeply involved in studies. Since 1774 he lived in London where he performed stirring piano sonatas in concerts, something still quite unusual at that time. In the following years he made himself a name in the London musical life as piano player and teacher. In the early 1780s Clementi went on a long concert journey through Europe. Later he also worked as a music publisher and piano manufacturer. In 1798 the famous piano factory "Longman & Broderip" was renamed to "Clementi & Co.". With Clementi as director the company not only built pianos but also published works written by all famous musicians of that time. When the Philharmonic Society was founded in 1813 Clementi was named one of the six directors and often took part in their concerts with great passion. 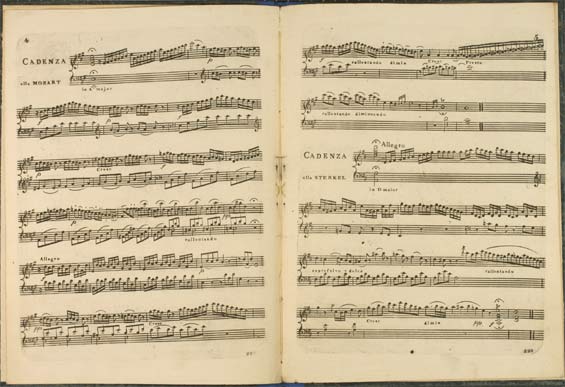 Cadenzas for piano concerts, composed in the style of famous composers, André, Offenbach 1787

The cadenzas, composed according to the style of renowned composers Joseph Haydn, Leopold Kozeluch, Wolfgang Amadeus Mozart, Franz Xaver Sterkel and Johann Baptist Vanhal and complemented by an individual one, represent a type of musical anthology that should clearly demonstrate Clementi's knowledge of the works of his fellow composers as well as his own musical flexibility. On Christmas Eve of 1782 Clementi competed with Mozart in a musical competition in the presence of Emperor Joseph II and the Russian Tsar Paul I without suffering any damages to his name. At that time cadenzas were only noted and printed with exceptions. Hence, the collection is of historical relevance as it shows the rewritten form canon that served as a pattern for cadenzas. Beethoven with his very individual, if not to say revolutionary cadenzas would have quickly shown any contemporary imitating this style his limits. 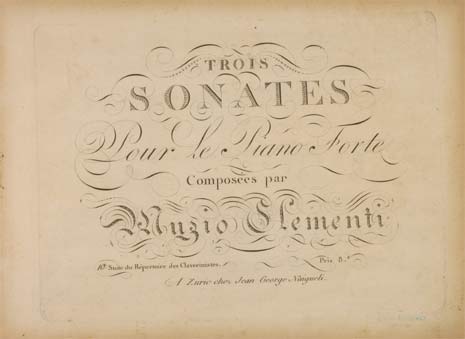 The sonatas op. 25 were published in 1804 as "10. Suite du Répertoire des Clavecinistes", a series edited by the Zurich publishing composer Johann Georg Nägeli. The ensuing 11th delivery then contained Beethoven's sonata "Pathétique" op. 13 and the first print of the sonata in E flat Major op. 31 No. 3. From a publisher's point of view, Clementi and Beethoven were then on a comparable level. In his piano sonatas the elder now and then elaborated on approaches for the future which the younger must have studied with attention during his first years in Vienna. Later Clementi self-confidently added a selection from his over fifty year long working life to the fairly well-known piano study programme with the sophisticated title of "Gradus ad Parnassum, or The Art of Playing on the Piano". 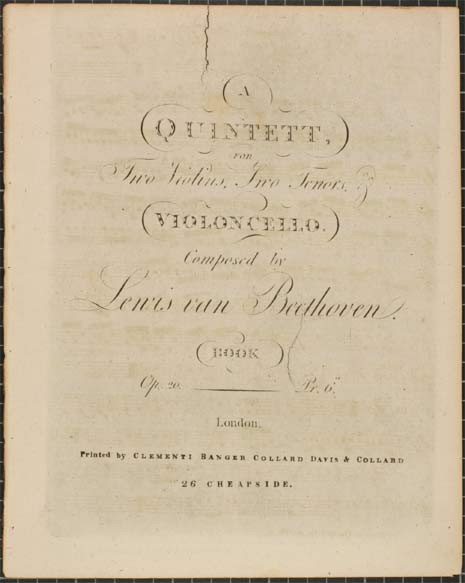 The copy is a later edition of the reprint by Clementi, Banger, Hyde, Collard & Davis dated 1807. The septet's original edition was published by the Franz Anton Hoffmeister publishing house in Vienna and Leipzig in 1802. In an announcement in the Vienna newspaper Beethoven explicitly wrote that only the publisher was responsible for the transformation into a smaller instrumentation deemed only for string instruments. The visible plate cracks on the title page, a sign of wear, prove that many copies of this edition were printed which in turn proves that the quintet was also very popular in England. From 1802 until 1810 Clementi went on a long journey to the Continent, selling his own and other works to publishers and accepting the works of other composers for publishing purposes. In April 1807 he met Beethoven in Vienna. In a letter to his business partner Collard he described the meeting: According to Clementi, Beethoven started grinning at Clementi in public places. Of course, he tried hard not to discourage the young composer. Finally, he was able to conquer the "haughty beauty Beethoven", a term that may be interpreted in various ways and encompasses various meanings from "proud" to "noble" to "uppish". When Clementi first visited Beethoven at his place, he effusively praised some of his compositions and was able finally to conclude an agreement covering the following pieces: the 4th piano concert op. 58, the three string quartets op. 59, the 4th symphony op. 60, the violin concert op. 61 and an adaptation of the piano concert as well as the "Coriolan" overture op. 62. Beethoven received 200 Pounds. However, only the string quartets and the violin concert, i.e. the adaptation thereof which Clementi had suggested himself, were later printed. Although Beethoven gave notice when the Vienna editions were published to facilitate the simultaneous edition of the English editions, those were printed with a delay of two years. 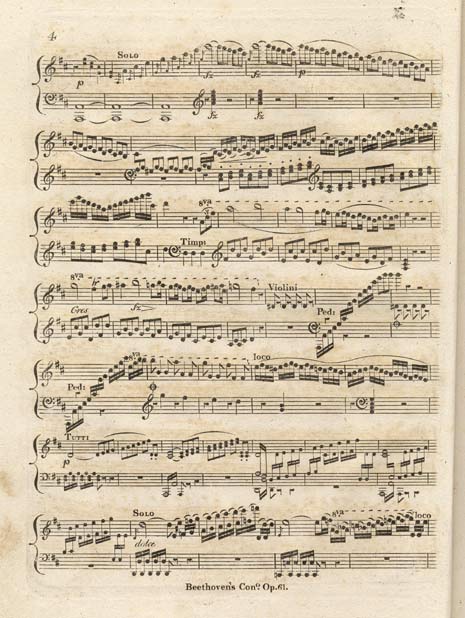 Piano version of the violin concert (D Major) op. 61 Royal College of Music, London
The piano version Beethoven - possibly with the support of an assistant - drew up on Clementi's request was published at the same time as the original version. Today, only one single copy remains and is now in possession of the Royal College of Music in London. In the field of concerts the piano version did not gain any relevance. Its purpose is more of a "second use", stemming from material expectations rather than artistic beliefs. In any case Beethoven wrote the piano version "for" piano player Clementi and not for use within his own concerts.

In 1810/11 Beethoven's operas 73 to 82 were published as "first" original editions. All were published shortly before the German parallel editions by Breitkopf & Härtel. The string quartet op. 74 was edited two months earlier. The title cover explicitly mentions the other Beethoven editions published only a short time before: "Where may be had just Published by the above Author, A Concerto / for the Piano Forte. Two Sonatas, for Do. Thema, with Variations for Do. / A Fantasia for Do. and a Concerto for the Violin." Meant here are the piano versions of the violin concert op. 61, the piano sonatas op. 78 and 79, the piano variations op. 76, the piano fantasy op. 77 and the original version of the violin concert. Here, the string quartet is labelled with opus number 62 because Clementi continued counting from his last Beethoven edition. The piano sonatas were then published as op. 63, the piano concert op. 73 as op. 64 and the choir fantasy op. 80 as op. 65. The other editions did not have an opus number. 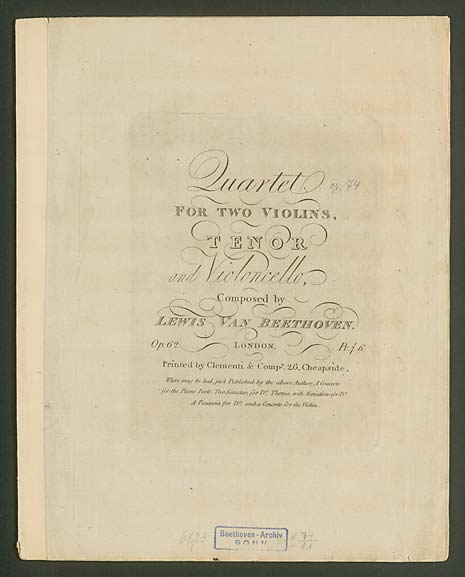