After having sold a total of 13 works to the Vienna publisher Sigmund Anton Steiner in early 1815, Beethoven tried to arrange for a parallel English edition for these pieces, too. A request directed to Sir George Smart in this matter remained unanswered. Two and a half months later Beethoven offered the compositions to Johann Peter Salomon in order to bring them to an English publisher (both letters are shown on the following pages). Salomon managed to sell at least four pieces: For 130 Dutch gold ducats London publisher Robert Birchall bought the violin sonata op. 96, the "Archduke Trio" op. 97 and the piano extracts of the Seventh Symphony op. 92 and of the "Grand Battle Symphony" op. 91. Beethoven's former pupil and friend Ferdinand Ries who spent ten years of his life in London, carried out the corrections for Birchall and settled further details between composer and publisher such as publication dates. 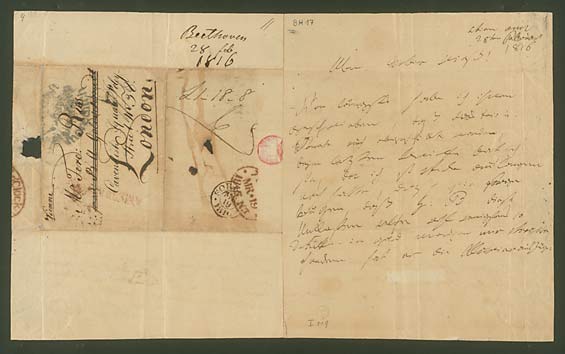 Letter to Ferdinand Ries in London, February 28th, 1816
In the meantime Beethoven had sent all four compositions to London and now requested the publisher to reimburse him the costs for copying and postage in addition to his payment. ("It is very little for an Englishman but a lot more for a poor Austrian musician!"). On February 10th he sent Ries a detailed bill stating additional expenses of ten ducats. Besides, he expressed his sorrows about Salomon's death for whom Ries served as executor of his will: "Salomon's death inflicts pain on me because he was a noble man whom I remember from my childhood days."

Ferdinand Ries (1784-1838)
In 1824 Ries returned to the Rhineland. Shortly before, this portrait was created and published in the English music magazine "The Harmonicon". Ries gave it to his old Bonn friend Franz Gerhard Wegeler (1865-1848) as a gift and added the following handwritten dedication: "to my friend Wegeler Ferd: Ries" ("meinem Freunde Wegeler Ferd: Ries"). The title quote of the exhibition "Where your compositions are preferred to any other" was taken from a letter from Ferdinand Ries to Beethoven. 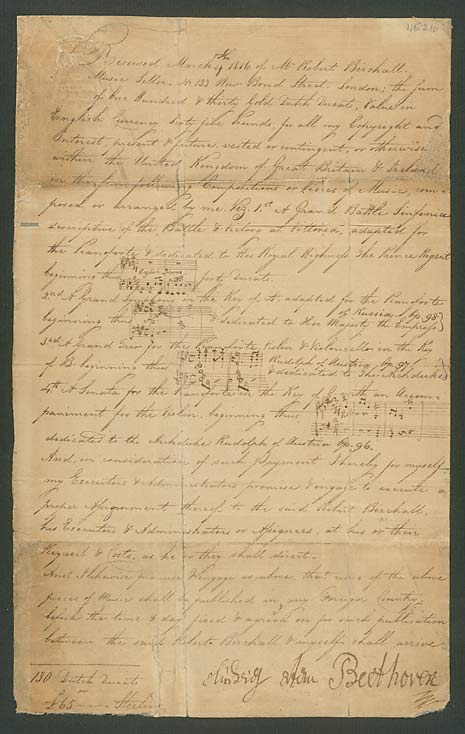 Summary of ownership and receipt for Robert Birchall, March 9th, 1816
With the confirmation of ownership Beethoven ceased the rights of ownership and publishing for the UK and Ireland of the mentioned compositions to the publisher and obliged himself to delay the publication in other countries until after the pieces had been published in Britain. The compositions are individually listed with incipit, dedicatee and opus number (the Seventh Symphony wrongly named op. 98). The simultaneous publication on the Continent and in Britain should protect any publisher from financial damages caused by unauthorised reprints. Nevertheless, the Vienna publishing house Steiner published the violin sonata already in July 1816 whereas Birchall published the English edition three months later in October. In case of opus 91 Birchall was ahead of Steiner by two months. Also the piano extract of the Seventh Symphony was first published in Vienna and two months later in London in January 1817. Obviously, Beethoven never succeeded in giving London exact publication dates.
Although the composer must have received his remuneration at the latest in early May, he did not send the signed document to Johann von Häring who took care of his English correspondence to be forwarded to England until September 1816. 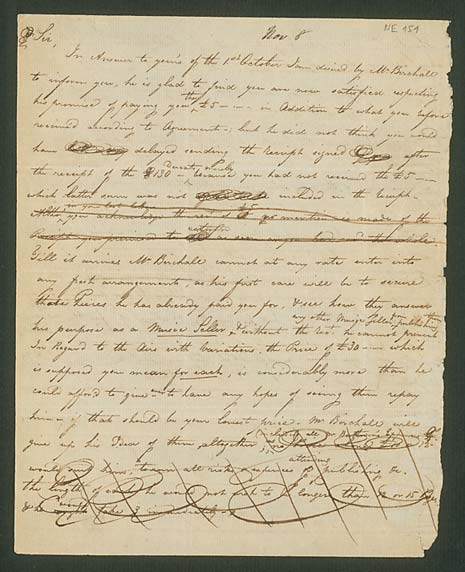 Letter concept from Christopher Lonsdale to Beethoven, November 8th, 1816
Birchall's employee Christopher Lonsdale expresses his contentment with the payment now being complete. Before, he had asked Beethoven to indicate one remuneration sum including all expenses. Lonsdale repeatedly reminded the composer of the ownership confirmation and supposed that Beethoven would not sign the document until he received his additional claim. According to the receipt Beethoven had been reimbursed on August 3rd. On September 9th he had also given Peter Joseph Simrock who visited him in Baden the property confirmation along with a short letter addressed to Johann von Häring to be forwarded to London. Obviously the further delay was the fault of the banks. Birchall had continued to commission Beethoven for adaptations of folk songs for violin or cello accompaniment, however, he considered the remuneration of 30 Pounds requested by Beethoven as exaggerated. With a reference to Birchall's bad health other offers (piano sonata op. 101 and a never completed piano trio in F Major) were refused. The cooperation stopped. As late as December 1816 did Birchall publish the English original edition of the trio. Hence, the Vienna original edition was again ahead by three months. 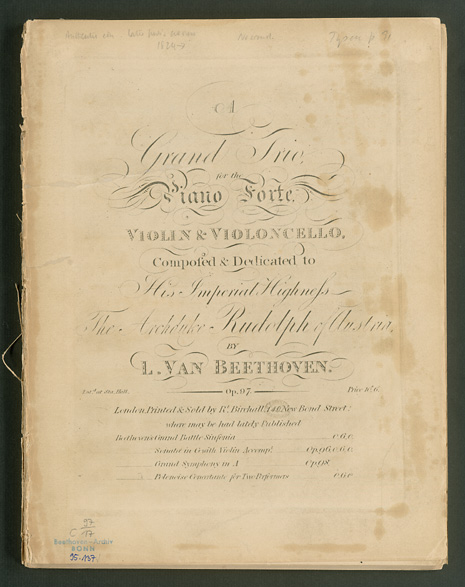 Trio for piano, violin, violoncello (B flat Major) op. 97
Ferdinand Ries should also offer the variations on a march by Anton Diabelli (C Major) op. 120 for publication in England. On April 25th, 1823 Beethoven made the following announcement: "In a few weeks you will also receive 33 new variations on a subject (Waltz opus 120), dedicated to your wife." The corrected copy is the promised manuscript. Beethoven himself wrote a dedication and the date on the title: "33 variations on a waltz dedicated to the wife of my dear friend Ries by Ludwig van Beethoven Vienna, April 30th 1823". The English edition was never published as Ries tells in his Beethoven memories: "Because Beethoven had delayed the sending so long and had forgotten all about the commission, that when I brought Boosey [the London publishing house interested in publishing the composition] the variations, we () found out it had already been published in Vienna () with a dedication to Madam Brentano". 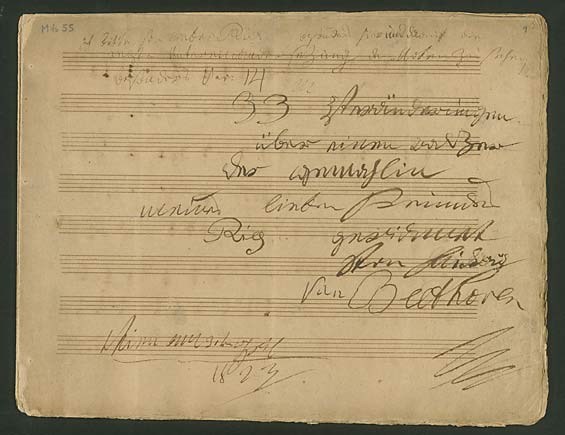 Title page written by Beethoven of the corrected copy of the Diabelli variations op. 120
Zurück Weiter