In February 1827 the already fatally ill Beethoven contacted his old acquaintance Ignaz Moscheles to ask for financial help. George Smart and Johann Andreas Stumpff received similar letters. In earlier years the Philharmonic Society had been in correspondence with Beethoven several times concerning a concert for his own avail. Now Beethoven, who had already been unable to work for months, felt himself in the situation to ask for such a concert. As weak as he was, he had to dictate the letter. Only the signature later cut out by Moscheles was written by his hand.
In 1808 piano player, composer and conductor Ignaz Moscheles, originally from Prague, came to Vienna. Until 1820 he was part of Beethoven's circle of acquaintance. From the early 1820s until 1846 Moscheles lived in London but remained in written contact with Beethoven.
Thuringian harp manufacturer Johann Andreas Stumpff was a fervent admirer of Beethoven. In the autumn of 1824 he had visited Beethoven in Baden and remembered the visit in a preserved draft for a letter: "Still my loving heart is grateful for the fortuity that led me to lovely Baden and see face to face the most favourite of the muses and creator of the most eminent melodies ever created by the human spirit and who so kindly received me with such generosity that I will strive to earn all my life long." In the following year he particularly pleased the "greatest living musician Luis v. Beethoven" with the gift of a 42-volume full edition of the works by Georg Friedrich Händel.

After Beethoven's letter for help arrived in London the board of the Philharmonic Society immediately held a session and granted the composer's wish. The generous sum of £ 100 was quickly sent to Vienna. It was a noble deed by the Society for which Beethoven had not always been a reliable partner but still a highly appreciated artist. The day Beethoven was buried, which he, of course, did not know yet, Moscheles revealed to the Society the content of the letter his friend Sebastian Rau had written him. In the letter Rau described the tremendous joy Beethoven had expressed when he brought him the money gift the Society had sent. In fact, it was Beethoven's last great feeling of joy and it also improved the state of his health for a short time. 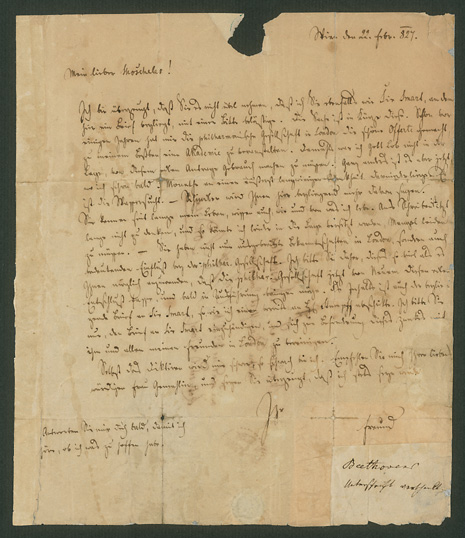 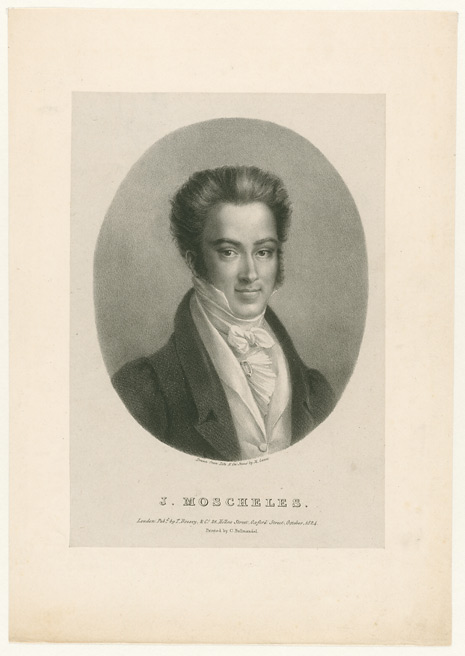 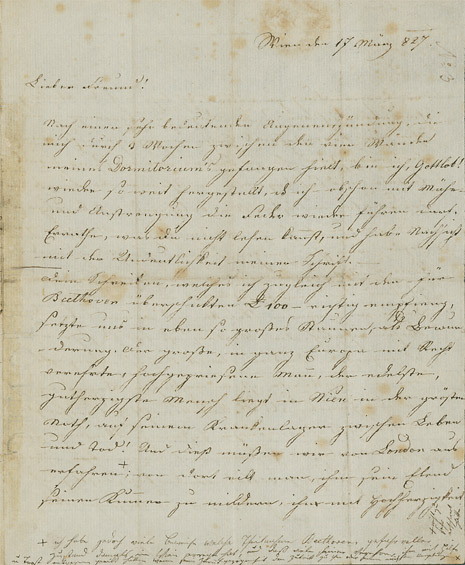 Sebastian Rau to Ignaz Moscheles, March 17th, 1827
On March 28th Sebastian Rau informed London of Beethoven's death. To Moscheles he wrote: "Beethoven is gone, he died on March 26th in the evening between 5 and 6 o'clock, bitterly struggling with death and in terrible suffering. But he had lost consciousness the day before." Vienna piano manufacturer Johann Baptist Streicher sent a letter with the same date and similar content to Johann Andreas Stumpff. In 1822 Streicher had undertaken a long study journey and had become friends with Stumpff in London.
Josef Teltscher obviously visited Beethoven several times in March 1827 to draw him. According to the reports of Anselm Hüttenbrenner and Johann Baptist Jenger it is quite certain that he was also present in Beethoven's living room in the afternoon of March 26th when the composer died. From the way Beethoven is drawn it can be assumed that he was still alive, yet unconscious, when Teltscher drew him. 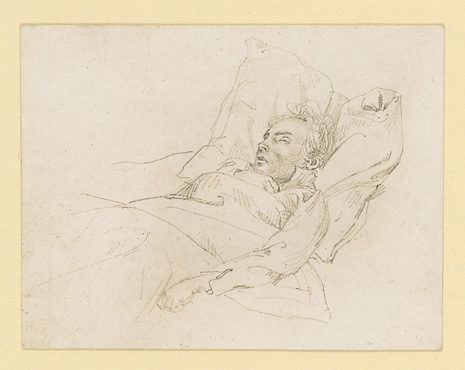