Just like Beethoven violin player Johann Peter Salomon (1745-1815) was born in Bonn and grew up in the Beethoven-Haus of today. And just like Beethoven 24 years later he was also admitted as a 13 year old to the Prince-Elector's Bonn Court Chapel. Later Salomon became Concert Master serving Prince Heinrich of Prussia. Around 1780 he settled in London where he played a major role in musical life until his death. As violin virtuoso, orchestra director and concert entrepreneur he had much success and also belonged to the founders of the Philharmonic Society. Together with George Smart and Ferdinand Ries Salomon promoted Beethoven's music in England. Concerning publishing affairs he later occasionally engaged in correspondence with Beethoven in Vienna. When Salomon died, Beethoven was very sad: "Salomon's death inflicts pain on me because he was a noble man whom I remember from my childhood days." 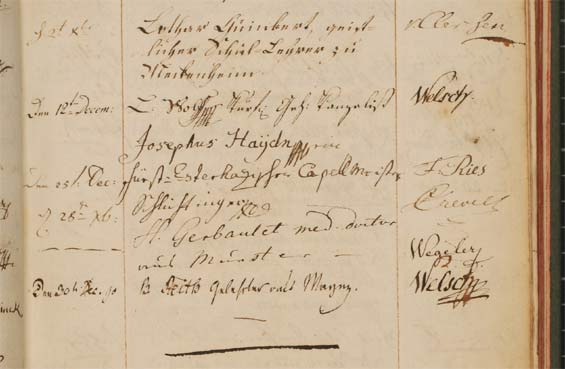 During his successful activity as head hunter Salomon managed to bring the renowned Joseph Haydn from Vienna to the British centre of music twice, namely in 1791/92 and 1794/95. This achievement is even mentioned on his tomb slab: "He brought Haydn to England in 1791 and 1794". On the first journey together they passed through his hometown of Bonn where some of his relatives still lived. On Christmas day in 1790 Beethoven's violin teacher Franz Anton Ries introduced Joseph Haydn as a guest to the "Lesegesellschaft" (reading society) founded three years ago. Certainly, Salomon, who on his outward journey had attended the reading society on October 1st in the company of two guests from London, was there, too. Hence on this occasion Beethoven not only met his future teacher but also made a first contact with England, although in a less direct way. 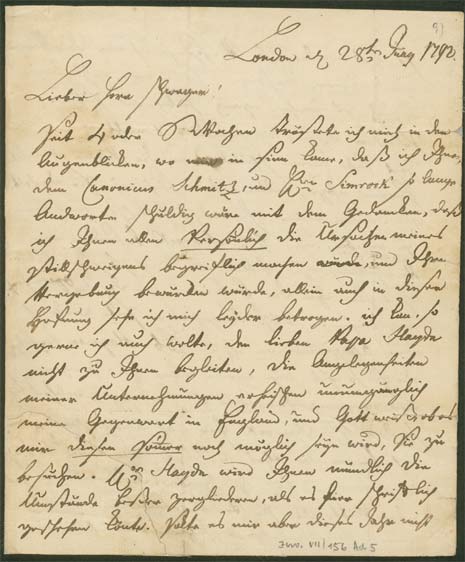 As opposed to the outward journey Salomon was not able to accompany Haydn on his journey back home in 1792. In a letter to his brother-in-law Geiger in Bonn he expresses his regret: "as much as I wanted I am not able to accompany dear father Haydn on his way to you, because the matters of my business are calling for my presence in England [] Mr. Haydn will tell you the reasons better." The expression "father Haydn" both shows a particular closeness as well as respect. The letter also says that Salomon purchased the piano extracts of two operas by Wolfgang Amadeus Mozart from Bonn publisher Nikolaus Simrock. 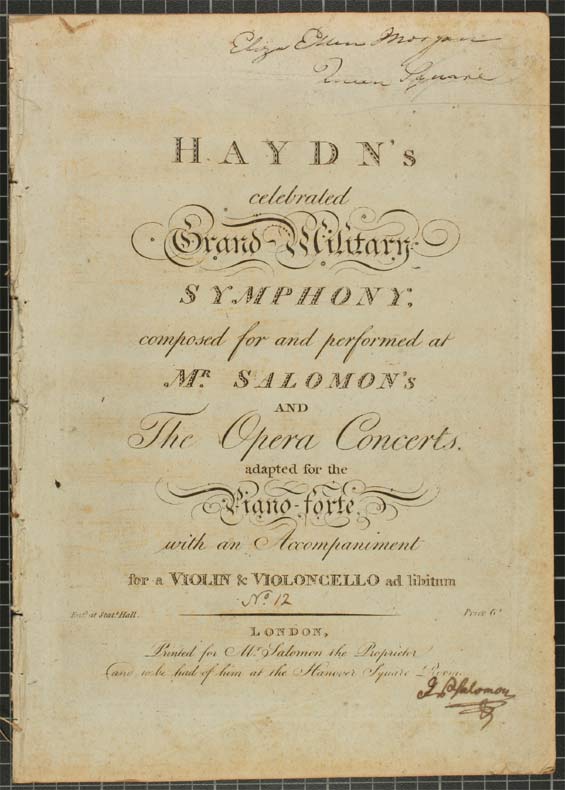 Transformation of the "Military Symphony" for piano trio

Haydn wrote his last twelve symphonies that are still referred to as the "London Symphonies" for Salomon and his concert series. According to the agreement the composer ceased all rights hereof to Salomon. Salomon then adapted the pieces for chamber music instrumentation and published them in his own publishing house even before the first publication of the orchestra part. The transformation of Haydn's "Military Symphony" No. 100 for piano trio bears Salomon's hand-written name on the cover sheet. 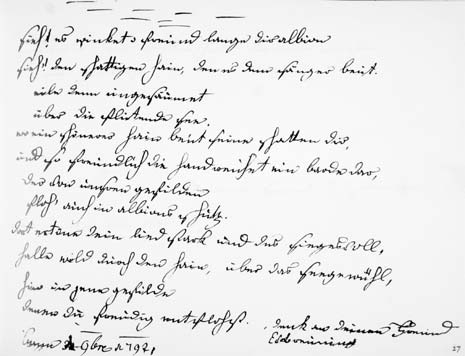 When Beethoven, thanks to a grant of the Prince-Elector, left Bonn in 1792 like Salomon 27 years ago to take lessons with Haydn in Vienna, his Bonn friends gave him a "book of memories" filled with good wishes for his future as a farewell gift. Christoph von Breuning's farewell greeting demonstrates that one assumed Beethoven would also travel to London: "Look! Long time, my friend, Albion [ancient name for the British Isles] has been waiting for you, see the shady groves it offers the singer" ("sieh! Es winket Freund lange dir albion / sieh! den schattigen Hain, den es dem Sänger beut"). When Haydn travelled to London for his second engagement in 1794/95 one wondered if the young Beethoven should accompany his teacher. However, Beethoven remained in Vienna, and even in the future he would never set his foot on London soil. 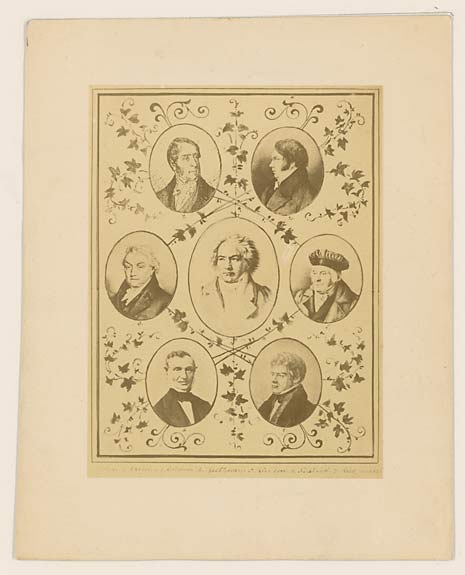 Another Bonn native, Ferdinand Ries (1784-1838), son of Beethoven's violin teacher Franz Anton Ries (who once was a pupil of Salomon), followed Beethoven to Vienna in early 1803 and became his piano pupil. A few years later he travelled around the world as a piano player and settled in London in 1813. After only two years he was named a director of the Philharmonic Society. Although in this position he was able to regularly promote the presentation of Beethoven's works in London, he did not manage to bring the composer to London. Out of the seven Bonn musicians depicted on the ornamented sheet three (Beethoven, Salomon and Ferdinand Ries) significantly influenced musical life in England in the first third of the 19th century.