On the following pages, each of the series' paintings will be given a brief description. Of great help in this interpretation was an audio tape which De Meo himself recorded a few years before his passing in order to better explain his life's work to posterity.

The energy of the universe is gathering, condensing into a fiery tornado which rages above a red and barren earth. De Meo paints a wasteland devoid of human presence, in which withered weeds are the only signs of life. This desolate landscape's intense red hues are in sharp contrast to the blue tones of the sky. 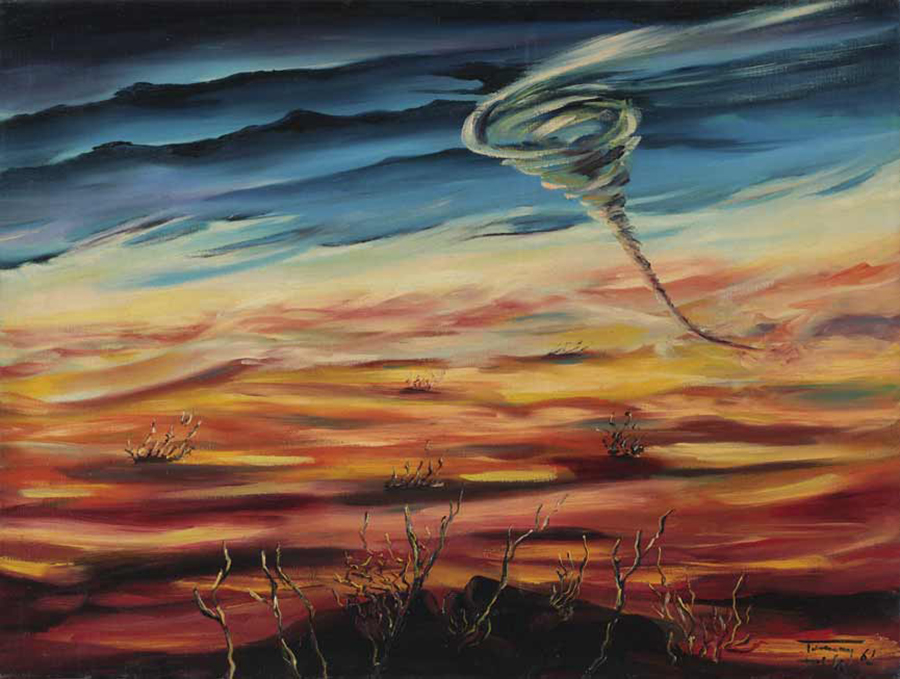 This blue-tinged painting depicts a scene of creation: from the unruly waters arise rocks, whose ostensibly jagged lines, at closer inspection, appear to be more organic, even reminiscent of human faces. The waters, the earth and the heavens are separating into distinct entities; a world is born.

The choice of architectural themes in this picture is by itself an exception from the majority of paintings inspired by Beethoven's music, for most painters either use natural landscapes or fully abstract imagery. If one looks more closely at this picture, its most striking aspect would be the curved contours of the architecture, in which the movement of the music appears to manifest itself. The artist had called the First Symphony an expression of the almost inebriating surge of emotions precipitated by the power of the music. Thus, the flowing architecture may express the emotions stirred within the deeply moved listener.

The sky is astir with the beating wings of black carrion birds, the blood red desert replete with the bleached bones of dead animals - De Meo's imagery ends with a grim vision, a warning memento to mankind.